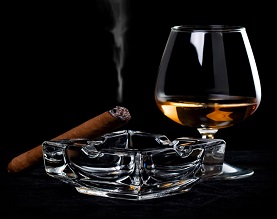 Whiskey is one of the most popular alcoholic beverages in the world, thanks to its distinct flavors and the fact that it’s the least likely to give you a hangover. Add to that the fact that whiskey also holds several medicinal properties, and you’ve got yourself an obvious success story.

Please remember that whiskey is alcoholic, so drink it responsibly and as always – in moderation.

The first confirmed accounts of whisky distillation are from the early 15th century, when the Irish and Scottish distilled it, calling it “Aqua Vitae” (Water of Life / Lively Water), for medicinal properties.

During the American Revolution, it was used as currency and George Washington even owned a distillery in Mount Vernon. During the Prohibition era (1920-1933), whisky was the only alcohol permitted for consumption, provided you had a doctor’s prescription.

The Health Benefits of Whiskey: