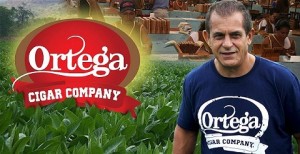 The sole purpose behind the creation of Ortega Premium Cigars was to “create and build a brand that people will enjoy.” It is a cigar company headed by founder Eddie Ortega and built on an uncompromising commitment to the quality and integrity of all its premium cigars. The passion, the craftsmanship and the meticulous attention to detail by Ortega ranks his cigars among some of the elite.

Ortega has been in the cigar industry since 1996 while married to the daughter of the late Rolando Reyes, Sr. During the mid-1990s, the Reyes family owned Puros Indios and Cuba Aliados cigar companies, two companies that were flourishing during the famed “Cigar Boom” of the 1990s. Reyes asked his then son-in-law to join the company, to which Ortega agreed and, as they say, ‘the rest is history.’

In between his time with the Reyes family and the 2012 launch of his own brand, Ortega Premium Cigars, Eddie Ortega was part owner of EO Brands. Ortega represented the ‘O’ half of EO and Erik Espinosa of Espinosa Cigars represented the ‘E’ half. The brand was distributed by Rocky Patel who owned 50 percent of the company. 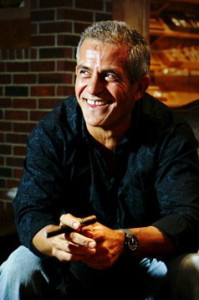 “The Reyes family owned Puros Indios and Aliados Cigars and the business was thriving, he (Reyes) asked me to come on board, so I did,” said Ortega. “Some years later I got together with my good friend, Erik Espinosa, and founded United Tobacco, which later turned into EO Brands.”

“Currently the Serie D Maduro is our best-selling brand with the #20 being the best overall seller,” said Ortega. “This is probably because currently, most consumers are looking for that fuller body smoke and the bigger ring gauges. The #20 at 6×60 is the biggest size in the line.”

The Serie D is available in both Natural and Maduro wrappers. The Maduro features a very dark San Andres wrapper with Nicaraguan fillers from Estelí and Jalapa. The cigar is medium to full-bodied with a rich flavor profile of cocoa, coffee, and oak. The Natural is cloaked in a Ecuadorian Habano wrapper also with Nicaraguan fillers from Estelí and Jalapa. Compared to the Maduro, this stick delivers a creamy profile of cedar, roasted nuts and cocoa. Both are box pressed and provide a memorable smoking experience.

The newest addition to the Serie D line is the Black. It is the only Serie D blend that is not box pressed. This blend wears a dark Ecuadorian Habano wrapper leaf with aged Nicaraguan fillers from Estelí and Jalapa. Peppery spices and cedar are at the core of this complex cigar with a twang of natural sweetness. Each of the three Serie D lines is made at the My Father factory in Estelí by Pepin and Jaime Garcia.

The Cubao is another one of Ortega’s hot sellers. Originally, the Cubao was a part of the EO Brands lineup, but Ortega decided to re-release it under his new brand at the 2013 IPCPR Trade Show. The Cubao is dressed in a Ecuadorian Sumatra wrapper with a Nicaraguan binder and fillers from Estelí and Jalapa. This cigar is medium in strength but full of flavor. It is creamy, spicy and full of 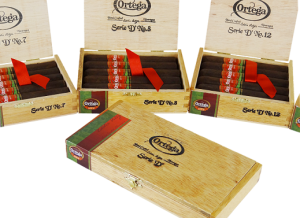 rich tobacco flavors. It too is made at the My Father factory in Estelí.

“I’ve had a great relationship with the Garcia family for quite some time and couldn’t think of anyone better to make my cigars,” explained Ortega. “Aside from being great friends, they make great cigars.”

Eddie Ortega’s newest project is going to be something special. He is teaming up with Sean Williams of El Primer Mundo Cigars to create a unique project called, “Larceny.” The cigars will be packaged in 20 count boxes with 10 blended by Ortega (EPM Larceny) and the other 10 made by Williams (Ortega Larceny). The premise is a spoof on industry copycats who often “steal” ideas and blends from other cigar makers. Larceny will be made by Erik Espinosa’s La Zona factory and is scheduled to be released spring, 2015.

“This is a project that originally came along because of the friendship I have with both Sean and Erik, we thought it would be cool to collaborate on a project together,” expressed Ortega.

It all starts on the farm. Ortega prides himself on his brand’s consistency and the quality tobaccos that he uses in his blends. All the tobacco used for Ortega Premium Cigars comes from the Garcia farms, which are located in Estelí and Jalapa.  Ortega is highly involved in the blending process, overseeing the tedious progression from start to finish, which can take anywhere from three to six months, or even longer at times.

“I work closely with the factory during the testing process,” explained Ortega “It is a long process of experimenting with different tobacco blends until you arrive at the one you think consumers will really enjoy.” 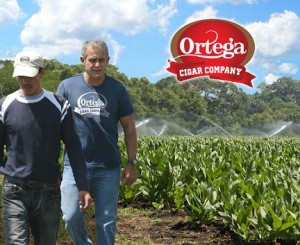 As Eddie Ortega forges ahead, he expects to “grow the brand while continuing to produce great cigars.”

“There is an abundance of great cigars on the market and mine is one of the great cigars currently available,” boasted Ortega. “Just like great wines, it is always good to experience the different profiles that are unique to each and every cigar brand out there.”

What is the name of Eddie Ortega’s newest project, which is expected to be released spring, 2015?

The contest runs through Monday 2/23/15 and the winner will be picked at random. Winner will be notified through email and announced on social media on Tuesday. Valid to residents of continental US only.

14 Thoughts to “Eddie Ortega – Building a Brand that People Enjoy”