Lighting a cigar is the most important step to ensuring that your cigar burns correctly from start to finish. The cigar could have been rolled perfectly in the factory, but because of user error, all the hard work of the torcedores is wasted and your cigar could canoe, tunnel or burn unevenly.

If you have already lit your cigar and it isn’t burning correctly, don’t be too quick to blame the brand or roller. It may not be poor construction. More times than not, it is user error. First assess yourself. – Did I toast the foot? Did I create an even light?

First, why is a correct, even burn important?

Simple – The char line affects the flavors of the cigar. The cigar is made with the intention that it will be lit correctly; therefore, burn evenly. An even burn allows the flavors to be emitted as they were intended by the cigar’s blender – consistent. Consistency is the most important attribute of a cigar. An even burn keeps the flavors consistent. If your cigar burns evenly, it will most definitely taste better than an improperly lit cigar. The end result is a MUCH more enjoyable smoking experience. 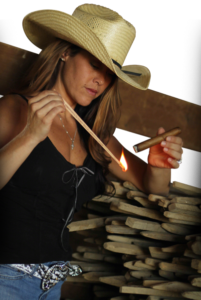 All cigar smokers do not toast their cigars, but those who do have found that a nice, slow toasting of the foot of the cigar can get the ash burning well at the start of the smoke. This gives your cigar a better chance of burning evenly all the way through. The purpose of toasting is to set fire to not only the filler, but binder and wrapper as well – the wrapper is where the majority of the flavor comes from. Without toasting, you’re likely to only ignite the filler and immediately start an uneven burn.

How to Properly Toast

Hold the cigar at an angle (45-60 degrees) over the flame and keep the foot of the cigar a few inches above the flame. Keep in mind, a torch lighter is easier to control and easier to initiate the burn. Important: Don’t let the flame actually touch the tobacco at the foot. Instead, hold it close enough to get the foot glowing, without it truly catching fire. Some rotate the cigar until the foot begins to ignite; but if using a torch, you can aim the flame wherever it needs to be.

Be careful not to overheat the cigar.

What Does it Mean to ‘Overheat’ a Cigar? 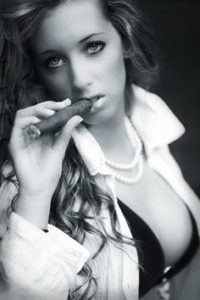 Check out the foot of your cigar – is it burning evenly? Often, it appears that the entire foot is lit but that’s not always the case. If the orange glow is not even, Do Not hit it again with your torch to touch up the black spots. The more you heat the cigar, the more tars can form. Instead, gently blow on the foot until the burn is even.It’s important to blow gently because, like applying fire, you don’t want it to overheat the tobacco.

Once the cigar is completely toasted, let it sit for a minute so the wrapper, binder and filler are all lit, and the burn is even. Then take your first puff.

Because your cigar is burning evenly from the beginning, it should be less likely to tunnel or canoe. Construction issues aside, a good toasting method will leave you holding a delicious, well-lit and nicely burning cigar with good smoke production and consistent flavor.

While toasting takes extra time and patience, it’s worth it to ensure an enjoyable smoking experience. Plus, the act of toasting romances the ceremonial appeal when you finally get to kick back and relax.

Check out this video of Nick Perdomo showing us how to properly toast and light a cigar.

Note: Information for this story provided by Cigar Adviser.