Most of us could use a little social lubricant every once in a while. It certainly is a lot easier to let your guard down and get up the courage to talk to the object of your affection after a few drinks. So you might assume that buying a woman drinks all night is the best way to get her to open up so you can make some progress (whether that progress is to the bedroom or toward a relationship). Well, be advised: This plan can backfire on you with disastrous results if you don’t follow the proper guidelines when it comes to buying women drinks.

Don’t get her drunk

Drinking certainly doesn’t bring out the best in everyone. While a drink or two might help you become the most suave and confident version of yourself, the same amount of alcohol might turn her irritable and depressed. After you buy her a few drinks, the girl you originally hit on may become a totally different and — let’s face it — a way lamer person. You may find yourself stuck on the business end of an endless tirade against her ex-boyfriend. Or you may simply find her drunken ramblings boring.

If you keep buying a woman drinks after the point where she seems like she’s been “overserved,” she could get sick. That’s about as far from sexy as you can get, and you don’t want to end up holding her hair over the toilet or hauling her into a cab at the end of the night. Sure, it’s intimate — but not in the way you were hoping for. 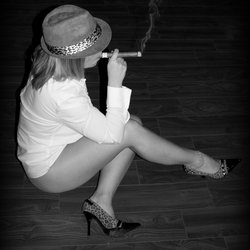 The point is not to get her drunk, but to break the ice and make it easier to get to know each other. You might think that getting her wasted will make you more attractive to her, but beer goggles don’t work the same way for women as they do for men. In fact, a British study showed that the effect wears off much more quickly for women.

Ask her what she’s drinking

Instead of coming right out and asking, “Can I buy you a drink?” try taking a more assertive approach by asking what she’s drinking. She will appreciate that you bothered to ask before buying her a drink and you’ll avoid wasting money on a cocktail she doesn’t like. Also, by not referring to buying the drink, you may be able to avoid her responding with, “I can buy my own drinks, thank you.”

If you keep a tab instead of paying for each drink as it comes, you can avoid actually flashing the money in front of her, which some women may find arrogant. Instead, settle up your bill at the end of the night to keep her mind on you and not on your wallet.

Challenging your buddy to see which one of you can drink the other under the table is one thing, but getting competitive with a woman you’re trying to pick up is quite another. First of all, the more sober you are, the better chance you have of getting her number, making a good impression and seeing her again. Second, she will probably sip her drink at about the same pace that you drink yours (whether or not she realizes it — it’s something we tend to do unconsciously), so avoid knocking back your drinks too quickly. Chances are you can hold your liquor a little better than she can (there are exceptions, of course, but we’re speaking generally here), and if she’s keeping up with you, you’re probably not going to end up with the situation you were aiming for. Keep it to about two drinks and you should be okay.

Hold it with the shots

Ordering shots for your guys can seem like a spontaneous way to up the excitement, but it basically signifies a shift of gears from a relaxed evening of flirtation to a crazy night out where anything can happen. Sounds fun, but you should know by now that things can go very, very badly when you decide to go on a mini bender with a stranger. Save the insanity for a night with the guys or with a girl you know a little better.

Don’t be a douchey drinker

Whether your ultimate goal is one hot night of passion or a long-term committed relationship, starting out on the messy drunk foot is never a good idea. Buying her a drink can be a great way to start a conversation with a girl that has caught your eye, but if you go overboard it will get complicated faster than you can order another round of shots.