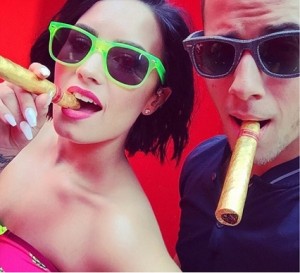 Los Angeles, Calif. (July 13, 2015) – Congratulations to Demi Lovato who celebrated her No. 1 song, “Cool for the Summer” with the Daniel Marshall Red Label “24kt Golden Cigar”, the World’s Celebration Cigar, alongside her business partner Nick Jonas. Their commemoration further ensures the longevity of cigars in our culture. It supports the perception that cigars are “celebratory,” are enjoyed now and will be enjoyed into the future, as Daniel Marshall says, around the “Modern Day Campfire.”

Since Lovato’s “Cool For The Summer” premiered earlier last week, she has been hosting launch parties across the country, including Chicago where she met up with her business partner, Jonas for a celebratory bash complete with The Golden Cigar. The duo recently founded a record label together, Safehouse Records, in May 2015.

Their celebration with Daniel Marshall Red Label Golden Cigars is a great nod to the cigar industry as a whole. Lovato cited cigars as being “sexy,” and her top of the charts #1 summer song is certainly something to be celebrated. We are elated to see cigars are here to 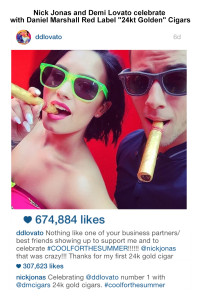 stay, with the next generation continuing to carry the torch for the “Modern Day Campfire.”

Daniel Marshall, a 33-year veteran of the cigar industry is one of the world’s leading names in quality humidors and luxury cigars, including the highly esteemed Golden Cigar. His humidors have graced the homes of countless Hollywood celebrities, US presidents, dignitaries, and fashion designers among others. Marshall is a cigar and humidor supplier of England’s Royal Family. Daniel Marshall has also created and private labeled for the prestigious luxury gift houses Tiffany & Co., S.T. Dupont, Cartier, Fred Joaillier, Harrod’s, and Garrard’s of London. Daniel Marshall’s humidors are historic, with a collection on display at the Smithsonian Museum. Visit Daniel Marshall’s site at www.danielmarshall.com. You can also find Daniel Marshall on Facebook at www.facebook.com/danielmarshallhumidorsandcigars or follow Daniel Marshall on Twitter @DMCigarWorld or Instagram @DMCigars for real time updates