Few things are as demonized nowadays as smoking and wealth. And, being that cigars kinda distill those two things into one delicious package, people tend to look at cigar smokers like they’re the kind of weasel who has Gordon Gekko on speed-dial. (I’m not talking about the Gekko from Wall Street 2: Money Never Sleeps either.)

But perhaps you’re like me, the kind of fella who’d like to occasionally smoke a cigar, whether to celebrate something or to perhaps simply unwind, yet are scared to. Won’t people automatically assume you’re some power-hungry ass? Not necessarily. Here’s some tips to follow before you next fire up.

Goes without saying. The only person able to smoke a cigar while simultaneously sporting slicked-back, Master of the Universe-style hair and not look like a jerk, is coach Pat Riley. And only when he’s celebrating in the locker room after having won another NBA championship. Did you just beat the Celtics in 6 games? No? Then you’ll need a more relaxed hairdo when you smoke a stick.

Smoking a cigar in a suit is fine. A tuxedo, perhaps. A white leisure suit with a mostly unbuttoned Hawaiian shirt underneath? Get 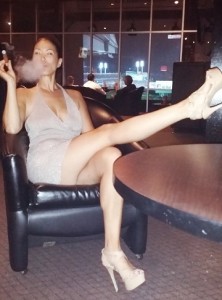 real. You look like the kind of drug kingpin who has an exotic zoo on his property. At the same time, a cigar deserves a certain dress code if you will. Mainly, any outfit you don’t mind immediately laundering the next day.

As Gary Korb, Executive Editor for Cigar Advisor told me, “Try not to draw attention to yourself. Of course, this is hard to do when you’re smoking a cigar, since cigars put out 10 times more smoke than a cigarette.” If you’re still concerned your comically large cigar is inherently making you look like a clown, you could always just smoke ten cigarettes at once.

Unfortunately, the days of lighting cigars with $100 bills are over. How ostentatious can you get?! Light them with dollar bills instead, or perhaps foreign currency. Makes you look far less privileged.

As Jonathan Detore, also of Cigar Advisor, notes, “If someone is offended by you smoking your cigar and you light one up anyway, you’re just being an ass. The smoke ends up becoming about spite rather than enjoyment. The whole time you’re smoking it, you’re thinking ‘I’ll show them!’ rather than kicking back and relaxing.” Unless you’ve just foiled their world domination plans and you shoot a smoke ring right at their nose. Now that’s totally cool.

Revel in the fact

…that, yes, perhaps you are, in fact, a cigar-lovin’ dude. And there’s nothing wrong with that. AsArnold Schwarzenegger told neophyte smoker Jimmy Fallon, when smoking a cigar, “Try to be cool. You put the cigar in (your mouth), then you start lighting it, then you turn it slowly, check things out…”

Check the Instagram hashtag #cigarselfie and it’s like turning the pages of a “Jerk of the Day” tear-off desk calendar. As John Pullo of Famous Smoke Shop, an online cigar store, told me, “Stop ‘selfie-smoking.’ I don’t need to see you posing with your Liga Privada #9 six ways from Sunday.”

Of course, when it’s all said and done, you’re just smoking, not curing AIDS, Ebola, and cancer like Kim Jong-Un just did. Richard Carlton Hacker, bestselling author of The Ultimate Cigar Book, recently released in a new fourth edition, told me, “When smoking a cigar in public, assume an air of sophistication. Occasionally hold it out in front of you and gaze longingly at it, as if it were a beautiful woman, while watching the smoke curl up from the ash. It will make those non-smokers around you wonder what you’re up to—and what they’re missing.”