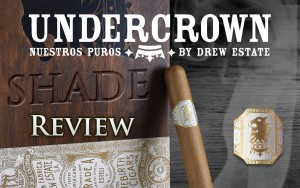 “I think this cigar might actually attract new smokers to the Drew Estate brand who might have been intimidated by the strength of the [original] Liga line and the herbal infusion of the ACID cigars line,” added Zman.

Shot at Leaf Cigar Bar & Restaurant in Easton, PA, other members of the panel include Cigar Advisor editors & writers, John Pullo, Gary Korb, and Jonathan Detore. The cigar chosen for the review was the 6″ x 52 Undercrown Shade Gran Toro. Some of the comments the panelists offered about the new blend were strikingly similar regarding its strength:

“It’s great for mild-bodied smokers looking to break into a medium-full bodied cigar with a silky smooth Connecticut wrapper. They get what they’re used to up front, while being taken into the next higher level gradually and gently,” said Mr. Detore.

“It’s a radical departure from the original Undercrown we’re all used to smoking,” said Mr. Pullo. “Pacing yourself can help in experiencing some of the different flavors this cigar has to offer. It’s deceiving — you expect mild flavor because of the wrapper, but this Shade boasts some serious body.”

“If the Gran Toro is an example, experienced cigar smokers will undoubtedly take to the Liga Undercrown Shade selection,” said Mr. Korb. “New and less-experienced cigar smokers may have to adjust their heads a little. If you’re used to the sweetness often found in a lot of Connecticut wrapper cigars, you’ll find very little of it in here…this smoke has a lot of machismo.”

To get the most flavor out of it, the panel also recommended that smokers let the Undercrown Shade rest a minute or more between puffs.

“I believe Willy was looking to keep some of the body and richness of the original Undercrown in the mix, but allowing it to be consumed in more of a bite-size manner,” added Mr. Pullo, “meaning [it’s] for those who maybe don’t have the interest in, or the appetite for a full-bodied cigar. And that’s why I think Undercrown Shade is such a departure for Drew Estate.”